Yes, that is his real name. Michael Sell, or Mike as he’s referred to around the office, is the Director of Sales and Marketing at Outdoor Business Network, using his knowledge of the outdoor industry to better serve our customers. Chances are, if an outdoor sport involves a helmet, a flotation device or protective earmuffs, Mike has tried it at one time or another.

Including snowboarding, mountain biking and crossfit training, Mike has begun shooting in tournaments for the International Defensive Pistol Association (IDPA). After working for the security industry at the Fermi II Nuclear Power Station, he decided to do IDPA to keep his perishable shooting skills fresh. He placed 5th out of 12 in the first IDPA tournament he competed in. Mike last competed on May 6th at the Brooklyn Sportsman Club in Brooklyn, MI where he placed 7th out of 17. 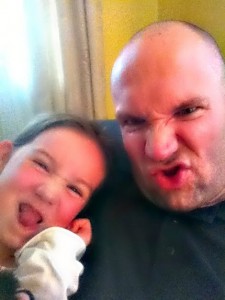 More than competing or indulging in outdoor sports, Mike enjoys spending time with his 7-year-old daughter, Aubrie, who is just finishing up the first grade. Aubrie and Mike go sailing and fishing together, but her favorite thing to do with her dad is watch cartoons. Fortunately, though, Aubrie loves all of the outdoor sports that Mike does and is eager to try them all, too. She wants her very own pink cricket, which couldn’t make Mike happier. “I started shooting when I was seven or eight,” Mike said, “and I was hunting by myself when I was nine, toting around a shotgun in the woods.”

Mike smiled as he grabbed his phone to show a series of photos and videos of Aubrie. There are some of them together, making silly faces at the camera, while others show Aubrie passed out on the couch after a long day of playing outside or sailing with her dad. The best were of Aubrie and her pet snake, a nine foot red tail boa named Beautiful. “Of course she named the snake herself,” Mike laughed as he flipped through more photos.

Although Mike has a strong love for almost every outdoor activity and is excited to share those activities with his daughter, his career has been built on a dedication and passion for sales. With 10 years experience directly in sales, Mike has finally found a way to fuse his hobbies and his career. “I love working with numbers,” said Mike, “seeing where there is room for improvement. I like to visualize my goals through numbers and push myself to meet and exceed those goals.”

While Mike does participate in many extreme sporting events, he does have a soft side. Guitar is one of his only indoor hobbies, though he would describe himself as a hack at best. Mike is also an expert on a sewing machine and even makes his own Halloween costumes nearly every year, although it’s hard to picture him at the task. He has a good sense of humor, always ready to laugh with others and at times, at himself. This year, he will be going as Mr. Clean for Halloween.

How to address bad internet press.